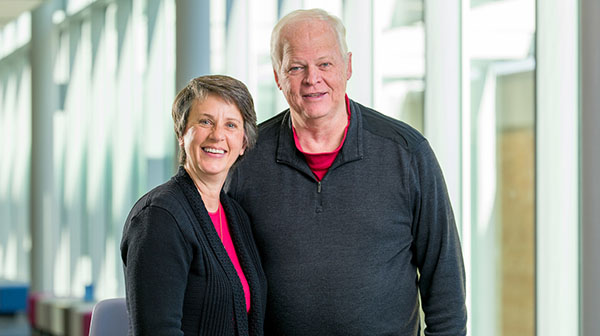 The decision to enroll in college in her 40s wasn’t easy for Star Stevens. But as a single mother, she knew she needed to do something following her divorce to elevate her salary enough to provide for her three children.

And the challenges to complete a degree in management information systems were immense. One of her children is autistic with a severe anxiety disorder, and in 2017 just as she was starting at Utah State University her fiancé died in a swimming accident. Then there were the financial constraints.

But as difficult as it was at times, Stevens was determined to not take out student loans to help pay for her education.

“Student loans in your 20s are crappy and it sucks, but you’ve got an additional 20 years to pay them off. Student loans at my age are totally different because you’re already at the age where people’s student loans should have been paid off.”

With this donation, the Huntsman School will invest in existing experiential learning programming and add opportunities to allow all Huntsman students to participate in meaningful and relevant learning in and out of the classroom.

One particularly difficult year, she wasn’t sure how she could pay for school until a professor told her about the “Data Ninja” scholarship. Available to junior and senior students in the data analytics and information systems department with a GPA between 2.7 and 3.7, the $2,000 grant was created in honor of Julie Cook ‘14, a Huntsman School of Business graduate who died in a car accident in 2016. 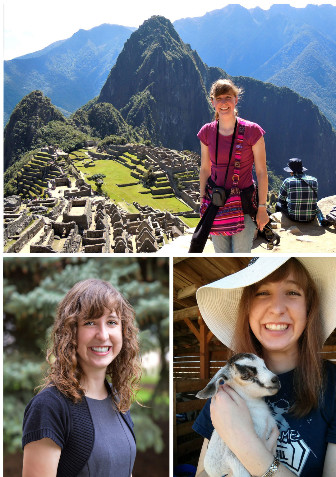 Top: Julie Cook loved to travel and visited Machu Picchu in 2012. Lower left and right: Julie Cook studied hard and she believed in the importance of helping others who have less. Her parents James and Debbie Cook established the Data Ninja Scholarship at USU to ensure her legacy lives on. Photos courtesy of the Cook family.

Stevens initially believed she wouldn’t qualify because her GPA was over 3.9. But a professor shares her story on her behalf with the scholarship committee and Julie Cook’s parents, James ‘87, M.E. ’93 and Debbie ‘87, M.S. ’89, encouraged Stevens to apply. She received the “Data Ninja” scholarship, which paid for her tuition within $100 and kept her in school.

“You have no idea how much this means to me,” Stevens wrote to the Cooks in April 2020. “I promise I will not waste your investment. I will work hard and hopefully be an example, not just to my children and loved ones, but to other women who find themselves in my situation at some point in their lives. They do not have to let their situation control their future, they too can get an education and be their own success story.”

It took five years, and some personal challenges remain, but Star Stevens completed her bachelor’s in December 2021 and emerged debt-free and engaged once again.

“I know what it is like to lose some close to you,” Stevens says, her voice cracking with emotion. “It nearly broke me losing my fiancé, and I watched his mother go through that loss. But I can’t imagine losing one of my kids and what that would do to me.

“So, my heart just went out to her family, and when they picked me, I was super honored because it was such a personal scholarship,” Stevens adds.

The first part of July 1, 2016 was filled with joy and anticipation for the Cook family.

Julie Cook, who was just starting her third year of employment at Goldman Sachs in Salt Lake City, drove to the Cooks’ home in Providence to join her parents and youngest brother, Blaine, for a Fourth of July weekend in Island Park, Idaho. The Cooks were in a pickup hauling a fifth-wheel camper and a small ATV trailer as they approached a downgrade just north of Preston, Idaho.

“We had traveled that road countless times and knew it well,” Debbie explains in a piece written about Julie for an upcoming book. “Because we had a long load, James drove carefully as we started the descent. Without warning, the fifth wheel began to fishtail violently, and we immediately knew we were in trouble.”

“… James began immediately applying pressure to the brakes on the fifth wheel to regain control. Within seconds, though, the truck jack-knifed and the trailer hitch blew out from the truck, causing the truck to catapult up over the guardrail and roll two or three times down a steep hill, finally hitting a tree, crashing to a stop on the driver’s side.”

"Its been very heart-warming to be able to meet and help these students.  We've been staying in touch with many of them, and it just feels like they're members of the family now."

The carnage was horrific. While Blaine escaped with only minor injuries, Debbie suffered a broken collarbone, and James was gravely injured and flown by helicopter to the hospital in Pocatello.

“(James) wasn’t moving, and I knew he had been hurt badly,” recalls Debbie, who had to be extricated from the truck by first-responders. “When I looked in the backseat to see if Julie was all right, she wasn’t moving either. She looked as though she was sleeping peacefully. In that moment, the thought didn’t even cross my mind that she could be dead.”

It wasn’t until she was at Franklin County Medical Center in Preston that Debbie was informed that James had been diagnosed with a brain bleed and a shattered vertebra in his neck and might not survive. A nurse also told her that Julie had died on the scene.

“I thought my world had come to an end,” Debbie says.

Debbie, Blaine, and the Cooks’ other two children, Tyler and Destiny, held Julie’s funeral while James was still in the hospital.

“James was in the hospital for about six weeks, and he was touch-and-go, so I could have lost both of them,” Debbie says quietly.

But eventually the family patriarch recovered and was able to return to work as an engineer at USU’s Space Dynamics Laboratory, where he has worked for the past 20 years.

But moving on was extremely difficult for the Cook family. Something that made it even harder for Debbie was a “concern” that Julie wouldn’t be remembered beyond her family and friends. 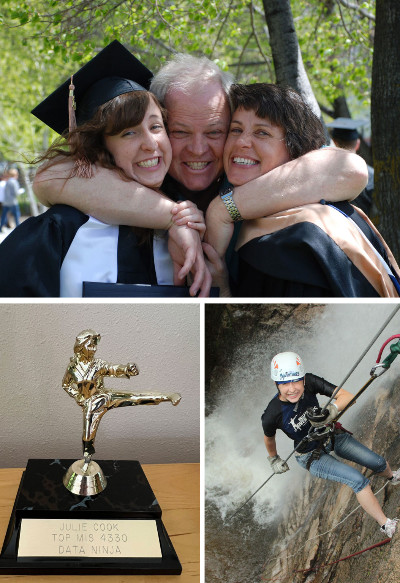 Top: Julie smiles with her parents James and Debbie at her 2014 graduation from USU. Bottom left: The coveted data ninja award Julie received her senior year. Bottom right: Julie rappels during one of her many travel adventures. Photos courtesy of the Cook family.

“I just felt like we needed to do something to help Julie’s legacy live on,” she says, “and one day it just hit me that it would be really cool to do a scholarship. I presented the idea to James when he got home from work, and he really liked the idea.

“Julie always wanted to help people, especially those who might not have been as blessed financially as she was. And she was really interested in lifting people up, so we thought that would be a great way to continue on that characteristic of hers.”

The Cooks say that during her time at USU, Julie “blossomed” from a “shy, little, scared-of-her-shadow-type-of person” to someone who was very social and loved people and learning about different cultures. They attribute much of that to her involvement in Huntsman’s Small Enterprise Education and Development program, which led to her visit several South American countries, as well as going on Global City Breaks to London and Paris.

But Julie was intensely focused on her studies her senior year, and, in particular, coveted the “Data Ninja” trophy that former USU professor David Olsen awarded to the top student in one of his upper-division database classes. She secured the small, plastic trophy topped with a martial artist delivering a kick. It meant so much to her that Julie proudly displayed it on her desk at Goldman Sachs.

“That is probably one of her most-prized possessions ever,” Debbie says.

The Cooks named the scholarship they established in Julie’s honor after it. The unique requirement of having a GPA between 2.7 and 3.7 comes from the realization that not all students are great test takers or might have situations in their personal life that limit their time to study.

“We’re trying to get individuals into this scholarship that may not have as high of grades as other people who are trying for scholarships,” James notes. “We want to get these individuals some help financially so they can attend school.”

Prior to the 2022-23 school year, the Cooks had gifted five $2,000 scholarships per school year, but they recently adjusted the amount of money according to the number of applicants and the particular needs of students. Many friends and family members have also donated to the fund, and as of September, 18 USU students have been the recipient of the “Data Ninja” scholarship. The Cooks have had a chance to get to know almost all of them, a select group that includes first-generation students, single mothers, veterans, and Robins Award winners.

“It’s been very heartwarming to be able to meet and help these students,” Debbie says. “We’ve been staying in touch with many of them, and it just feels like they’re members of the family now.

“Last October we met one of the recipients and his wife came and gave me a big hug after the event was over, and it felt just like a Julie hug,” Debbie continues with tears in her eyes. “It just felt … it just felt so good. So good. I thought, Oh, this is my Julie hug. And these students are very grateful for the help.”