The Enduring Legacy of an Inspiring Aggie 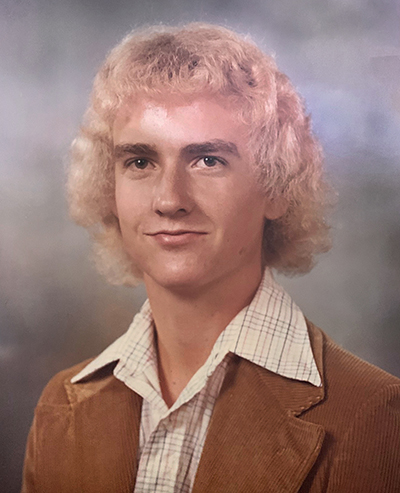 James “Jim” Minkler ’82, ’83, accomplished a great deal in his short lifetime – not just academically and professionally, but as a person whose kindness and optimism made a positive difference for so many.

Drawing deep from his own source of inner strength, his faith, and his loving family, network of friends, and community that surrounded him, Jim never let the almost unsurmountable physical challenges he faced at a very young age overwhelm him. Instead, asking for nothing in return, Jim focused his attention on the betterment of others — he played a prominent role in the lives of his nieces and nephews, served as an Elder in the Church of Jesus Christ of Latter-day Saints, and made an enduring impact on his alma mater by leaving a generous gift to Utah State University in his will.

As Jim designated, the James R. Minkler Endowed Scholarship is a needs-based award for juniors and seniors (two students each year) who are studying finance at USU’s Jon M. Huntsman School of Business. With his characteristic modesty, Jim never mentioned to his family that he had left instructions in his will about creating an endowed scholarship. Although his parents and siblings only found out about Jim’s gift to USU after his death at age 40, in 2001, they were not surprised that Jim wanted to reach out to those students in the School of Business who without financial aid would not have been able to benefit from higher education.  Jim was generous in the truest sense of the word — he did not expect any accolades in return.

The Minkler family of Logan, Utah, was headed by loving parents, Ray A. and Aileen Minkler. The oldest brother, Ray G., was 17-and-a-half years older than Jim, the youngest. Linda was the second oldest in the family, and Dorothy was the closest in age to Jim, although she was six-and-half years his senior. Despite these big age gaps, the four Minkler siblings were always very connected with one another. Their lives growing up in Logan were centered around education, church, community, and sports. Jim was an all-around accomplished and awarded athlete who excelled in football, basketball, and tennis. He lettered in all three sports at Logan High School, and earned All-State honors in football in his junior and senior years.

It was in his senior year while playing football for Logan High School during the 1977 season that Jim sustained a life altering injury resulting in a broken neck. He was left paralyzed below his neck and unable to move his limbs and torso. Given the severity of his injury, Jim spent six months at the University of Utah Hospital, a teaching hospital 90 miles south of Logan in Salt Lake City, where he began a rigorous rehabilitation program.

Ray and Aileen were by Jim’s side throughout his hospitalization, providing him with comfort and compassionate support. Jim and his parents sought guidance from their religious beliefs and practices to try to make sense of what had happened. Jim’s strong spiritual background truly helped him cope. The entire family prayed for the strength to accept that Jim was now a person who would live with quadriplegia.

His sister, Dorothy Minkler Davis, remembers those difficult early days and says with admiration that her brother did not focus on the tragedy. He simply believed that he had to do what he had to do.

“I am serious when I say that I never heard Jim or my parents ever complain about anything that had happened,” said Dorothy. “It was amazing. The three of them shared the same spirituality. Jim’s life was not the only life that changed in that moment of the accident — my parents’ lives immediately changed as well, as they took on the role of Jim’s lifelong caretakers.”

Sticking to His Plan 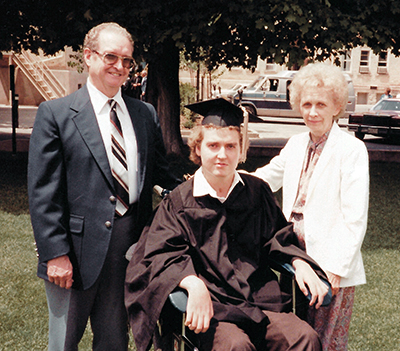 Jim returned to Logan from Salt Lake City six months after the accident. With loving care and support from his parents, he also finished all coursework for the second half of his senior year so that he could receive his high school diploma alongside his classmates at graduation.

For many young adults who face the physical and emotional obstacles of quadriplegia, plans for higher education would be put aside, but this was not the case with Jim. Determined to achieve his academic goals, Jim started USU as a freshman in September 1978, exactly on schedule as planned before his accident. He did not request an admissions deferment, or any special dispensations because of his quadriplegia.

When deciding his course of study, Jim chose to major in finance. Perhaps he chose finance as a major because many years earlier, his father had earned a degree in accounting and business administration from USU’s then School of Commerce and Business Administration. More likely, for Jim it was a practical decision based purely on the fact that USU’s Huntsman School of Business (then known as the College of Business and Social Sciences) was housed in the only building on the Logan campus with elevators and an ADA-compliant entrance in 1978.

“My brother was a very private person who didn’t like to talk about his accident or dwell on what made him different from anyone else,” said Dorothy. “Taking classes in the Eccles Business Building was a logical choice because it could accommodate his wheelchair.”

In his first years at USU while using a manual wheelchair, Jim’s friends and cousins helped him get the bulky wheelchair into the classrooms. While an undergraduate, he got an electric wheelchair. Jim quickly mastered the complexities of operating a powered wheelchair without the use of his arms and legs. He did this by learning how to use the muscles in his neck to control the wheelchair.

The difficulties of being a full-time student with special needs did not deter Jim. According to Dorothy, “My brother  had a phenomenal memory that helped him tremendously throughout his academic and professional career. In addition, he got one of the early personal computers and made the most of specialized assistive technology. He used a mouth stick to turn book pages and type. Amazingly, Jim could type 35 words per minute using his mouth stick.”

In 1982 Jim graduated from USU as valedictorian of the College of Business and Social Sciences. Without missing a beat, he earned his MBA with a concentration in Finance in 1983. As part of his graduate program, Jim interned at Logan Regional Hospital. Before he even completed his internship, Jim was hired for a full-time position as a budget analyst at the hospital. Over the next 17 years he advanced through the ranks and eventually became budget director.

“Jim loved his job and never hesitated to take on responsibility,” said Dorothy. “He got up each day, went to work and did his job.” 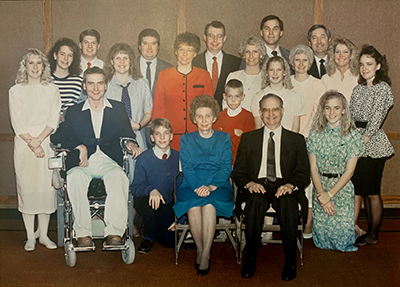 James Minkler with his extended family.

Outside of work, Jim was an avid reader. He had lots of friends, and especially enjoyed going to movies and sporting events. He loved watching football, even though it was the sport that caused his life-altering accident. Jim’s van, which was equipped to accommodate his wheelchair, was donated to him – the result of a very successful community fundraiser for Jim. The van helped make it possible for him to get out and socialize with people.

“I think what Jim loved most were our family get-togethers every Sunday,” said Dorothy. “He especially enjoyed the relationships he built with his nieces and nephews. The Minkler siblings stuck together — those of us who had moved away from Logan, all eventually came back — for Jim, our parents, and to support each other.”

An all-important facet of Jim’s life was the Church of Jesus Christ of Latter-day Saints. In his short lifetime, Jim served the church in many ways — as Elders’ Quorum president, Teacher’s Quorum advisor, Sunday School president, and home-teacher.

Jim’s death in March 2001 was sudden. He went to work on Friday morning and left for the weekend not feeling well. He was admitted to the hospital that Sunday and passed away two days later. The community, the Church, his co-workers at the hospital, and most of all his devoted family, grieved.

With the James Minkler Scholarship Endowment, Jim’s story continues to resonate. Students demonstrating financial need get to benefit from the tuition assistance that the scholarship provides. But more importantly, the entire USU community gains inspiration from the way this remarkable young man lived his life.

“Jim was fun to be around. He was very wise,” said Dorothy, “but what I miss the most is his positive attitude and the impact that his attitude had on everyone he met.”