A Utah State University (USU) employee who was instrumental in the passage of a new federal law that will dramatically improve the safety of all new vehicles will receive an award for his work from the Center for Auto Safety (CAS). 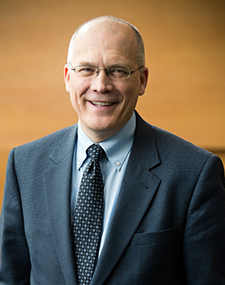 Ken Snyder serves as the Executive Director of the Shingo Institute in the Jon M. Huntsman School of Business. Since losing his daughter, Katie Snyder Evans, to a drunk driver in 2017, Snyder has advocated for the new law in partnership with Mothers Against Drunk Driving (MADD). The Infrastructure and Jobs Act signed on November 15 includes a provision that requires the National Highway Transportation Safety Administration (NHTSA) to create a rulemaking to mandate technologies in all new vehicles that will prevent impaired driving.

“Despite the success of the bill and this meaningful recognition, I’d trade it all and more for Katie to still be alive,” said Snyder. “This is dedicated as a legacy to her. We are now one step closer to ‘no more victims’.”

MADD.org states, “Imagine when technology that is as standard in new vehicles as airbags and anti-lock brakes detects when a driver is impaired and then stops the car before tragedy can strike. Technology exists to lead us to that day.”

“Ken came to MADD determined to use his expertise and connections to help ensure no other families experience the heartbreak that he and his family suffered when Katie was taken from them. Ken’s passion and technical guidance were pivotal in leading us to this history-making moment when the end of drunk driving is finally within reach,” says MADD National President Alex Otte.

The NHTSA must set final standards within three years and will evaluate technologies including:

Automakers are expected to implement the safety standard within three years, and new cars equipped with this technology could be available to consumers as early as 2026.

Key leaders in the passage of the law include Representative Debbie Dingell (D-MI), with co-sponsors David McKinley (R-WV) and Kathleen Rice (D-NY) in the U.S. House of Representatives. In the Senate, efforts were led by Ben Ray Luján (D-NM) and Rick Scott (R-FL) with co-sponsors Gary Peters (D-MI), and Shelley Moore Capito (R-WV).

CAS Executive Director Jason Levine states, "Ken Snyder is receiving the Center for Auto Safety's Cally Houck Award in recognition of his relentless and selfless pursuit of auto safety to prevent further tragedies associated with drunk and impaired driving, like the one suffered by his family. The award is named after Cally Houck, who lost her two daughters in a preventable car crash that was caused by a repairable defect in a rental vehicle. Cally fought for a decade to make sure this never happened to another family and because of her efforts it is now a violation of federal law for a rental car company to lease a vehicle with an unrepaired recall. Ken, like Cally Houck herself, persevered through incredible pain and managed to turn his tragedy into a legislative triumph by tirelessly advocating for the inclusion of the RIDE Act in the recently passed Infrastructure Bill. This provision requires the Department of Transportation to mandate new vehicles come equipped with technology that can mitigate, and hopefully eliminate, the behaviors that are exhibited by impaired drivers - saving as many as 10,000 lives a year on U.S. roads. Ken's unwillingness to take 'no' for an answer makes him a hero to thousands of families who will never know he helped to save their lives.”

Snyder will be honored on Wednesday, December 1, 2021 at 4pm (ET). To watch the award ceremony or for more information, go to www.autosafety.org.