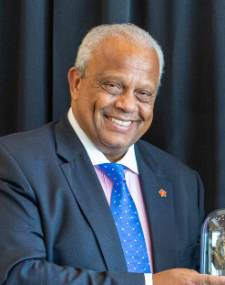 Lord Dr (Michael) Hastings of Scarisbrick CBE has enjoyed a distinguished career in education, government, television broadcasting, business, and public service. He is a member of Parliament the British House of Lords and the Chancellor of Regents University London and the former Global Head of Citizenship for KPMG International.

Michael began his career as a high school teacher in London, moving into government service in 1986 supporting policy initiatives to bring employment and development to Britain’s inner cities after some years of high unemployment and race-based disturbances. In 1990 he started working in television on education programming and as a presenter and then as Chief Political Correspondent for GM-TV. In 1994 Michael moved to the BBC as a presenter on the weekly Around Westminster program before joining its Corporate Affairs division. In 1996 he became the BBC’s head of Public Affairs and then its first head of Corporate Social Responsibility before becoming KPMG International's Global Head of Citizenship in 2006. Michael retired from KPMG in 2019.  Michael has also been a Trustee of the Vodafone Group Foundation for over 11 years concluding in December 2019 and is now a Governor of the Vodaphone supported MPESA Academy in Nairobi, Kenya, and a Vice President of UNICEF. He is also a Patron of WE – formerly Free the Children; and a former Director of Junior Achievement Worldwide.

In 2003, Michael was awarded a CBE (Commander of the British Empire) for services to crime reduction which includes 15 years as Chair of Crime Concern and nine years serving on the Commission for Racial Equality (1993-2001). In 2005, Michael was awarded a life peerage to the House of Lords. In the same year, he received the UNICEF Award from the then UK Chancellor for his outstanding contribution to understanding and effecting solutions for Africa’s children.

In 2014, a Doctorate in Civil Law from the University of Kent, Canterbury was conferred upon Michael in recognition of his leadership at KPMG, the BBC and for his work in international development and corporate responsibility. In 2017 Michael was installed as the Chancellor of Regent's University London.