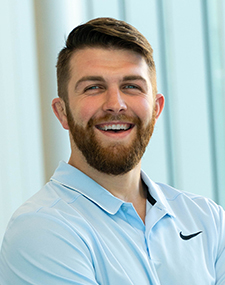 Nick is originally from Downers Grove, Illinois, which is a western suburb of Chicago. Before becoming an Academic Advisor for the Huntsman School of Business, Nick was a graduate assistant wrestling coach at the University of Wisconsin-Whitewater from 2019-2021. During his time at the University of Wisconsin-Whitewater, Nick was responsible for the holistic development of student-athletes. Nick’s initial academic advising experience came during his time helping student-athletes plan academic schedules that would allow them to pursue their academic goals, while maintaining their busy athletic schedules. Nick was also a part of the University of Wisconsin-Whitewater wrestling team, competing as a four-year starter, three-time team captain, and All-American during his undergraduate studies.

Nick enjoys anything outdoors and spending time with friends and family. He is excited to be able to explore Cache Valley and all it has to offer, including snowboarding during the winter season.