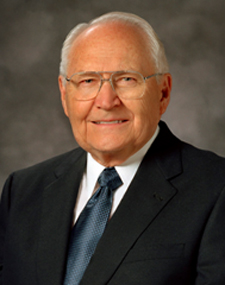 Title: Quorum of the Twelve Apostles

L. Tom Perry is known and respected by millions of members of the Church of Jesus Christ of Latter-day Saints as an apostle and spiritual leader. For many of them, however, it may be easy to forget that before he began serving his church in a full-time capacity, he had already demonstrated, through his own business career, the importance of integrity and strong workplace ethics.

The Distinguished Executive Alumnus Award is the highest honor that the Jon M. Huntsman School of Business can bestow. The award recognizes alumni who have set an example and who have contributed in a positive way to the world around them. There are few as qualified for this honor as Elder Perry.

Elder Perry started at Utah State Agricultural College in 1940 but left to serve a mission, in the Northern States Mission, in 1942. When he returned, he served in the Marine Corps and was among the first of the occupation troops to enter Japan. While in Nagasaki, he led a group of servicemen who helped rebuild a Protestant chapel. When he was transferred, more than 100 members of that Protestant congregation lined up along the tracks to honor him and his companions as his train pulled away. In 1946, he returned to Utah State Agricultural College where he met and married his wife, Virginia Lee, in 1947. He graduated with a bachelor's degree in finance in 1949.

He started as an internal auditor at C.C. Anderson Company of Allied Stores, Inc. Six months later he was transferred to Lewiston, Idaho, where he became controller of the C. C. Anderson store. In 1953, he was offered a position as controller with Boadway-Hale, Inc., in Sacramento, California. He worked there until 1962 when he moved to New York to take a job as controller of Associated Merchandising Corporation. In New York, he also served as the vice president and secretary-treasurer of Aimcee Wholesale Corporation. In 1966, he moved to Boston where he became vice president of finance for the Lechmere Sales Corporation. His next position was that of treasurer of R. H. Sterns, a department store chain in Boston.

William M. Sanderson, president of R. H. Sterns Company, said of Elder Perry, "His extreme dedication to everything he did was respected in his work as well as in his church activities. The warmth of his personality enabled him to fit in quickly . . . and he was very well-liked by all . . . He left here an impression of devotion to his religion and his family, for which we all greatly admired him."

When vocational expectations could have sent Elder Perry down a road of compromise, he stayed true to his own high ethical principles and accepted the challenges that came with so doing.

In business and in his church service, Elder Perry has found plenty of demand for his expertise and leadership. He has often had to work and serve long hours but has always guarded his time with his family and made quality time with them a priority. He had two daughters and a son with his wife, Virginia, who died in 1974. He married Barbara Taylor Dayton in 1976.