Leadership is the greatest need in the world today. The Stephen R. Covey Leadership Center develops principle centered-leaders of character and competence, who elevate all society. Located in the Jon M. Huntsman School of Business, the Covey Center's mission is to develop principle-centered leaders.

To realize our mission, the Covey Center serves as a leadership development hub on campus, with programs and resourses available to all students. Stephen R. Covey is known throughout the world for principle-centered leadership and the center in his name aspires to have a global impact. 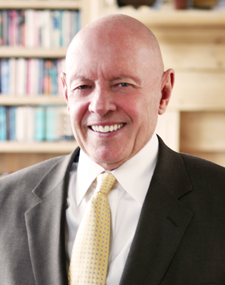 Recognized as one of Time Magazine’s "25 Most Influential Americans," Stephen R. Covey is an internationally-recognized leadership expert, a best-selling author and teacher. His work The 7 Habits of Highly Effective People was named the "#1 Most Influential Business Book of the Twentieth Century," and has sold more than 20 million copies in 38 languages.

Dr. Covey was born to Stephen Glenn Covey and Irene Louise Richards Covey in Salt Lake City, Utah, on October 24, 1932. He earned a bachelor’s degree in business administration from the University of Utah, an MBA from Harvard University, and a doctorate degree from Brigham Young University. He is also the recipient of eight honorary doctorate degrees.

Dr. Covey is co-founder and vice chairman of FranklinCovey, a leading global professional services firm with offices in 123 countries.

On Februrary 18, 2010, Stephen agreed to join the faculty at Utah State University and became the first incumbent of the Jon M. Huntsman Presidential Chair in Leadership.

On November 2, 2018, Dean Douglas Anderson announced the establishment of the Stephen R. Covey Leadership Center at the Huntsman School of Business. Concerning Stephen and the Covey Center, Dean Anderson remarked:

"In establishing this center, we acknowledge Stephen’s profound role and contribution to fostering principle-centered leadership, and our own desire to become better practitioners of the principles he taught. We honor and are inspired by his legacy. But we want to do more. We want to build upon it. We want to influence the lives of all students who graduate from the Huntsman School, from USU, and extend this influence beyond this campus to our state, the nation, and the world."