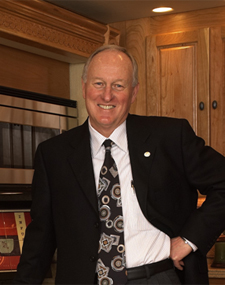 Mr. Toolson joined the recreational vehicle industry in 1972 as product manager for Kings Highway Mobile Industries in Los Angeles, where he later held the positions of national sales manager and vice president. In 1982, Mr. Toolson joined Anaheim, California-based, motor home manufacturer, Executive Industries, as a minority owner and executive vice president of operations, a position he held until 1986.

Mr. Toolson joined Coburg, Oregon-based, Monaco Coach Corporation in 1986 and completed a management buyout of the company in 1993. He has served as chief executive officer for the company since 1986 and as chairman since July 1993. From 1986 to 1995, Mr. Toolson also served as the company's president.

Outside of the recreational vehicle industry, Mr. Toolson is an active local community member, giving his time to a variety of charities. He also serves on the board of Paragon Medical, Inc., a manufacturer of surgical instruments and implant components, based in Warsaw, Indiana.

Mr. Toolson lives in Eugene, Oregon, with Judy, his high school sweetheart and wife of 41 years, and their two labrador retrievers, Buck and Duke.