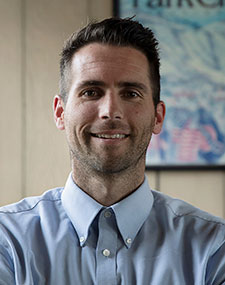 Tyler is the founder of Denik, a company that features artwork from across the globe on notebooks to generate funds for building schools in impoverished countries. He started the company in 2011 as a full-time student at Utah State University and now works with brands such as Nordstrom, Urban Outfitters, Nike, Quiksilver, Roxy, TOMS Shoes, and Nickelodeon. Denik has helped in the construction of schools in Mali, Laos, Guatemala, and Ghana.

During his time at Utah State, Tyler served two consecutive years as Student Body President. He was one of three students worldwide to be named as “Young Emerging Leader” by the Leader to Leader Institute in New York.

Tyler’s favorite things include watching TV with his wife, Nicole, wrestling with his children, and supporting Aggie athletics.