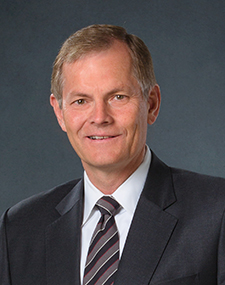 Gary E. Stevenson was called as the Presiding Bishop of The Church of Jesus Christ of Latter-day Saints in March 2012. He is also a co-founder and the former President and COO of ICON Health and Fitness, Inc. The company is now the largest developer, manufacturer, and marketer of fitness equipment in the world and employs more than 2,000 people at multiple locations around the globe.

Bishop Stevenson received a bachelor’s degree in business administration from the Jon M. Huntsman School of Business at Utah State University in 1979. While they were Huntsman students, Gary Stevenson, Scott Watterson, and Brad Sorenson, started their own business importing kitchenware, tableware, and marble products from Taiwan in 1977. In the 1980s, the company began manufacturing trampolines, which led them into the health and fitness industry. In November 1994, the company became ICON Health and Fitness, Inc.

The LDS Church called Bishop Stevenson into full-time service in 2008 when he became a member of the First Quorum of the Seventy. He served over the Asia North Area of the church, which included Japan when it was hit by more than 1,000 earthquakes in March 2011.

The Presiding Bishopric is responsible for the receipt, distribution, and accounting of church member tithes, offerings, and contributions. They also administer the programs that assist the poor and needy and oversee the design, construction, and maintenance of places of worship. They supervise the relief efforts the church undertakes, often with other non-profit organizations, when natural disasters strike.
He has been very involved with USU, serving as a board member of the President's National Advisory Council, the Alumni Association Foundation Board and the Jon M. Huntsman School of Business National Advisory Board.

Bishop Stevenson and Scott Watterson were co-recipients of the Inc. Magazine Entrepreneur of the Year award for the Inter-Mountain Region. The United States Small Business Administration honored him with the Entrepreneurial Success Award and the Jon M. Huntsman School of Business has recognized him with a Professional Achievement Award.

He was born in Ogden, Utah. He married Lesa Jean Higley in April 1979. They are the parents of four sons and have four grandchildren.