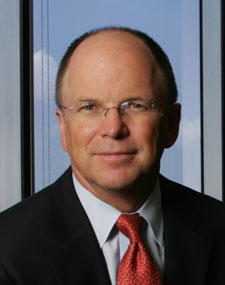 James H. Quigley was named CEO of Deloitte, a leading professional services firm, in June 2003. He began his career with Deloitte as an accountant in the Salt Lake City Office. Over his 30 year career with Deloitte, he has amassed a distinguished record of service to major clients in a range of industries throughout the country. This track record and his leadership abilities led him to the pinnacle of success at Deloitte.

Mr. Quigley participates on key committees within Deloitte and he is currently active on the board of trustees of Central Park Conservancy, Catalyst, the Financial Accounting Foundation, the U.S. Chamber of Commerce, Lincoln Center Consolidated Corporate Fund and the Partnership for New York City. He was recently honored by Accounting Today for the third straight year as one of the Top 100 Most Influential People in Accounting. Mr. Quigley has testified before the House Committee on Financial Services regarding the Sarbanes-Oxley Act’s ability to reduce the likelihood of fraud and restore investor confidence. He has championed a constructive, collaborative effort by all stakeholders during this period, which he has described in major venues as “The New Age of Accountability.”

Quigley graduated from Utah State University in 1974 with a bachelor’s degree in accounting. He was also awarded the honorary degree of Doctor of Commercial Science from Bentley College in Waltham, Massachusetts.

Jim is proud of his western roots and the values that have sustained him throughout his life and career. He was raised in southern Utah. Both his mother and father are Utah State alums. He has fond memories of supporting his young family while working on a degree that opened a world of challenge and opportunity. He and his wife, Bonnie, also a USU graduate, have three children and eight grandchildren. They currently reside in New Canaan, Connecticut.