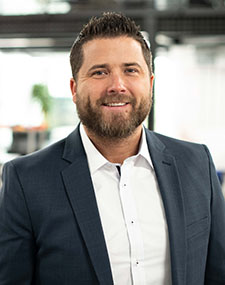 After earning a bachelor’s degree in philosophy at Utah State University, Nate worked for six years in various sales roles, where his responsibilities included building distribution channels for consumer products, sales team leadership, big box retail partnerships, and culture building. He then returned to Utah State University to earn an MBA with an emphasis in Entrepreneurship where he was the President of the MBA Student Association as well as the Consulting Group.

While a full-time graduate student Nate was a co-founder of Envolve Agency, where he served as it’s CEO. Envolve was Utah’s first exclusively social marketing agency and in addition to acquiring many national accounts, they consulted for multiple VC funds in Utah performing market analysis and creating marketing plans for their prospective investments.

As co-founder and CEO of Monumetric he gets to nerd-out about data, analytics, and optimization strategies that unlock significant earning potential for the people that publish content online. What they do at Monumetric isn’t magic, it’s science. They just follow the data. In addition to Monumetric Nate also serves on the founder's board of the USU Entrepreneurship Program and is a co-founder of Blue.holdings.

Nate believes in building people and finds motivation and fulfillment from deep, trusting relationships. He aligns himself with causes, companies, and people who are out to leave the world and everyone in it better than when they found it.

Nathan and his wife Monique have been happily married for 13 years. They have four amazing children that they are raising to change the world for the better.