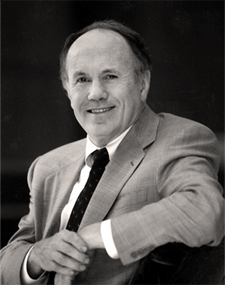 Edward C. Prescott is the W. P. Carey Chair of Economics and Regents Professor of the W. P. Carey School of Business at Arizona State University. He is also a senior monetary advisor at the Minneapolis Federal Reserve Bank. In 2004, he received the Nobel Prize in economic sciences for his contributions to dynamic macroeconomics: the time consistency of economic policy and the driving forces behind business cycles. He shared the prize with Finn Kydland of the University of California, Santa Barbara.

In addition, he was awarded the 2002 Erwin Plein Nemmers Prize in Economics, elected a fellow of the American Academy of Arts and Sciences in 1992, a fellow of the Econometrica Society 1980 and was selected to be a Guggenheim Fellow in 1974–75. In 2008, he was elected a member of the National Academy of Science and has been a research associate for the National Bureau of Economic Research since 1989.

Dr. Prescott is the director of the Center for the Advanced Study of Economic Efficiency at Arizona State University. He has authored more than 100 principal articles, addressing topics such as business cycles, economic development, general equilibrium theory, banking and finance, and economic policy. His book Barriers to Riches, argues that barriers to technology adoption are the dominant cause of the large differences in standards-of-living across countries. In 2007, he co-edited the book Great Depressions of the 20th Century with Timothy Kehoe. In addition to being widely published in research journals, he also contributes to articles in the The Wall Street Journal. Professor Prescott received his bachelor's degree in mathematics from Swarthmore College, and master's degree in operations research from Case-Western Reserve University and his doctorate degree in economics from Carnegie-Mellon University.

2004 recipient of the Nobel Prize in Economics