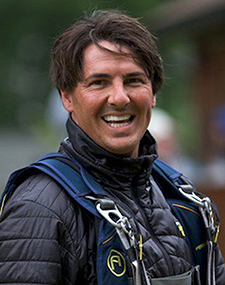 Marshall is a world-class paraglider pilot, ski BASE jumper, and PRO-rated skydiver. He travels the world in search of new and unique places to take to the skies. He picked up a paraglider for the first time in 1999 and discovered his life’s purpose: flying. As an aerial enthusiast with an infectious obsession with the sky, Marshall is most at home aloft. He is entirely dedicated to pushing the boundaries of mountain sports and bringing the talent out in the athletes around him.

Some of Marshall’s more recent achievements include taking third in the Red Bull Wings over Bear Lake Acro Paragliding Competition, and racking up over a million views of the viral video “Superior Speed Fly,” which he shot and edited.

In addition to his athletic pursuits, Marshall holds a B.S. in Business Finance from the University of Utah. He is a dedicated family man with a beautiful wife and two children.