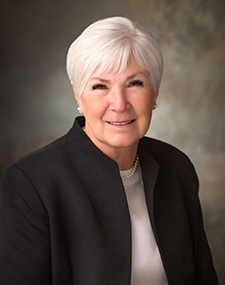 Karen Gail Miller is the owner of the Larry H. Miller Group of Companies. Gail and her late husband, Larry, grew their businesses into one of the largest privately owned companies in the United States. Beginning with the purchase of Toyota of Murray (Utah) in 1979, the Larry H. Miller Group is now comprised of more than 80 businesses and properties, operating in 46 states and employing more than 10,000 people. This includes 55 automobile dealerships, more than 100 sports apparel retail stores, 18 movie theatre complexes, the Utah Jazz, the Salt Lake Bees, Vivint Smart Home Arena, Miller Performance, television and radio stations and several other automotive, financial, sports, real estate, retail, and hospitality companies. Gail has a strong legacy of giving back to the communities where the LHM Group conducts business. This includes financial contributions, as well as her time and service and that of Group employees.

Gail and Larry created the Larry H. Miller Education Foundation, which awards college and trade school scholarships to dependent children of her employees; the Driven 2 Teach program, which takes Utah high school American history teachers to important historical sites throughout the United States for hands-on learning seminars; and Larry H. Miller Charities, which donates to qualified non-profit organizations. They also established the Larry H. & Gail Miller Family Foundation, which supports religious, charitable, scientific, literary and educational programs. Gail is the chair of the board of trustees of Salt Lake Community College, serves on the National Advisory Council at the University of Utah, and sits on the board of trustees for Intermountain Healthcare and Zions Bank. She holds an honorary alumna award from Brigham Young University and is the recipient of two honorary degrees – a Doctor of Humanities from Weber State University and a Doctor of Humane Letters from Salt Lake Community College.

In March of 2015, Gail was honored as A Giant In Our City by the Salt Lake Chamber. In 2014, she received the Utah Best of State award in the Individual Humanitarian Community Development – Private Sector category. The Continuum of Caring award was given to Gail by the Friends of the Senior Charity Care Foundation, due to her demonstrated strong support for the senior population throughout Salt Lake, Davis, and Utah counties. In 2012, the Salt Lake Chamber bestowed upon her the Athena Award in recognition of her lifetime achievements in both business and the community. Gail also received the Bronze Minuteman Award from the Utah National Guard in recognition for her service and leadership among Utahns and the Legacy of Life Award from the Intermountain Medical Heart and Lung Research Foundation which recognizes eminent leaders with Utah ties for their contribution to the well-being of people everywhere. In 2009, Gail was named the Salt Lake Tribune’s Most Influential Sports Figure in Utah. Gail is married to Kim Wilson and resides in Salt Lake City, Utah.