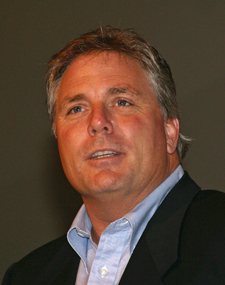 After completing college, David Miller accepted a position with Citigroup. He worked in the firm’s mergers and acquisitions division for several years before becoming the chairman of Los Angeles Chemical Company (LA Chemical) in 1990. Since he assumed leadership of LA Chemical 15 years ago, the company has grown exponentially. Through increased market share and acquisitions, the firm has become the largest, fastest-growing independent chemical distribution company in the U.S.

Mr. Miller earned a bachelor’s degree in finance in 1987. He and his wife, Myrna, who is also a Utah State graduate, and their child live in Lakewood, California. In his free time he enjoys traveling, boating, golfing and spending time with friends.

He attributes most of his personal and professional success to the long-lasting affiliations and solid education he acquired at Utah State. Recently Mr. Miller and his friend, Robert Matich, who graduated from Utah State’s College of Civil Engineering in 1989, funded a joint scholarship between the Jon M. Huntsman School of Business and the College of Engineering.