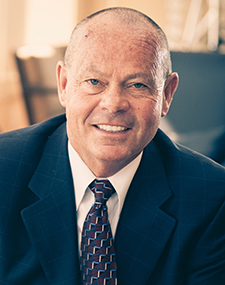 Mr. King has an extensive background in the retail food and drug industry. He began his career with Albertsons where he held several positions. In his last assignment, he served as president and COO of Albertsons with responsibility for a $16 billion operation with nearly 1,000 stores and over 100,000 employees.

He is a 1972 business information and education graduate. He is also a graduate of the Executive Program at Stanford University, USC Management Program and the Rogalla Institute of Leadership.