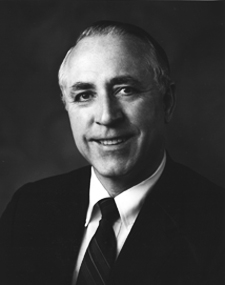 Ross E. Kendell retired in 1995 from a career with KeyBank of Utah that spanned almost four decades. He started out as a junior executive trainee for Commercial Security Bank (CSB) in Ogden, Utah, while he was still attending Utah State University. In 1987, while he was serving as the bank’s president and chief operating officer, CSB was acquired by Key Corp. Two years later, Mr. Kendell became the president and chief executive officer of KeyBank of Utah. Following his retirement from KeyBank, he served as a consultant for R.C. Willey for several years.

Mr. Kendell also guided many other organizations during his lengthy career. His professional service included acting as Utah’s director of the Bank Administration Institute as well as serving as the chairman and director of the Utah Bankers Association. Additionally, he supported a number of community service organizations including the Salt Lake Area Chamber of Commerce, the Pioneer Theater Company, United Way of the Great Salt Lake Area, March of Dimes, Junior Achievement of Utah and the Utah Higher Education Assistance Authority. He was a member of Utah State University’s Board of Trustees, the Jon M. Huntsman School of Business Dean’s Council, the School of Accountancy’s Advisory Council and served as the Alumni House Fund Drive chairman.

Mr. Kendell grew up in Cornish, Utah, and graduated from North Cache High School. After a short stint as a cryptographer for the United States Air Force, Ross attended Utah State University. In 1960, he graduated as valedictorian of his class and was named the Scholar of the Year. He majored in accounting and minored in economics and commercial law maintaining a 4.0 GPA during his entire academic career. In 1963, he graduated from the University of Wisconsin’s School of Bank Administration.