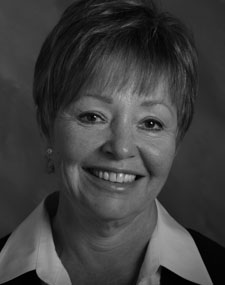 For 35 years, Kaye Jorgensen has worked for the O. C. Tanner Company. She started as a clerk in the personnel department in 1974 and now serves as the senior executive vice president of human resources and as a member of the corporate executive team.

She earned a bachelor’s degree in 1969 in secondary education from Utah State University. She now serves on the USU Foundation Board and the College of Humanities and Social Sciences National Advisory Board. In 2003, she received the Distinguished Alumnus Award from USU.

The Tanner Co., which serves 10,000 corporate customers, employs more than 1,750 people and is the nation’s leading manufacturer and supplier of corporate recognition products and programs. It has 50 sales offices throughout the United States and Canada. It has a manufacturing facility in Burlington, Ontario, Canada, and has recently expanded its operation with the opening of a distribution office in the United Kingdom. The year 2002 was particularly exciting for the company because of its involvement in the Winter Olympics. It was an official sponsor of the Olympics and the “Makers of the 2002 Olympic Medals.”

In July, Ms. Jorgensen will finish her sixth year on the board of directors of the YWCA of Salt Lake City where she also served as president for two years. She is now on the boards of the Utah Safety Council and the Employers Council. In 2006, she was honored by Utah Business Week Magazine as one of “30 Women to Watch in Business.”

She and her husband, Bruce, who is also a USU graduate, have a daughter, Amy, and a son, Brooks, and, as Kay calls them, “seven beautiful and quite amazing grandchildren."