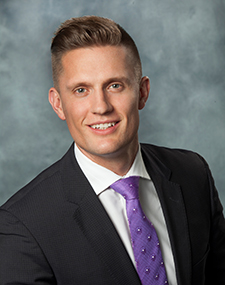 Dustin Jones is currently Senior Vice President, Macy’s, INC., overseeing the Fashion Office, Leased and New Business, and Vendor Collaboration. His responsibilities include all trend direction and global forecasting for the company. His teams manage high-end business and unique relationships with vendors such as Louis Vuitton, Gucci, Burberry, The Finish Line, and many others. Jones is also responsible for new business development within Macy’s, including new ways of approaching business in retail for the Macy’s brand.

Jones began his career in apparel with an internship for a company called Tropical Sportswear International (now part of Perry Ellis International). There he learned the power of creativity and began to build his business acumen within the apparel business. His passion for retail began as a manager and salesman for The Kater Shop on Logan’s main street. There he learned the trade of retail sales while finishing his Bachelor’s degree at Utah State University. The Kater Shop gave him his first opportunity to test his creative aspirations. While employed there he launched a very successful eBay business selling aged merchandise for tremendous profit. From there he followed his curiosity in internet retailing and launched SmartMissionary.com. A website dedicated to serving LDS Missionaries across the globe.

In 2005, upon graduation, Jones chose to move to New York and begin his career with Macy’s as a Product Assistant at Macy’s Merchandising Group. He hit the ground running and in the past 10 years has held 10 positions. These positions spanned the retail space from Production to Buying to Senior Management. During his 3+ years as a buyer for the over 670 retail store chain, Jones realized double-digit increases in volume each year.

In 2011 Jones’ career saw a pivotal change as he became Vice President of Men’s at Macys.com. Jones was responsible for leading the sales growth strategy for the Men’s area of business at Macys.com, managing buying teams for all areas of Men’s Sportswear, Collections & Young Men’s. Because of his earlier experience in internet retailing Jones was able to lead explosive growth, over 60% each year. From here he became the advocate and spokesperson for a new Macy’s mantra – Omnichannel retailing.

In 2012 Jones was elevated to Group Vice President. While in the Group Vice President role Jones pioneered Omnichannel retailing. He facilitated a detailed integration of bricks and clicks strategies to leverage inventories, fulfill demand, create new consumer experiences, and reach new growth opportunities. Jones also was a key leader in the company’s strategy to attract more Millennial generation consumers. His teams built innovative and disruptive strategies that have realized substantial growth within this market segment.

His innovative leadership in the Omnichannel and Millennial strategies have helped the company realize over $5 billion in sales growth over the past 5 years, and attracted millions of new consumers to the Macy’s brand.

Outside of his professional life Jones is a devote member of the LDS church. He served a full-time Mission in Vienna, Austria. He is also heavily involved in the Boy Scouts of America, co-founded the Westchester Libertarian Society, and is a major supporter of the Ronald McDonald House chapter in New York City.

He is grateful to his mentors throughout his life and career. He credits a strong family oriented upbringing, his positive experiences at The Kater Shop, and The Huntsman School of Business, and feels honored to be able to join an amazing group of alumni from that college. He currently resides in New York City and is a father to two beautiful daughters. He continues to look for opportunities within Macy’s to grow the company and to create new and exciting ways for customers to experience retail.