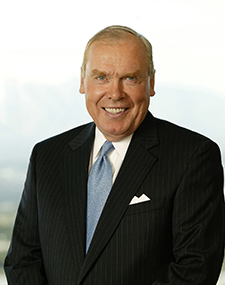 Jon M. Huntsman is founder and Emeritus Chairman of Huntsman Corporation, a global manufacturer and marketer of differentiated chemicals.

Mr. Huntsman earned his undergraduate degree at The Wharton School of Business at the University of Pennsylvania and subsequently earned an MBA. He has been awarded thirteen honorary doctorate degrees at various universities. Mr. Huntsman was a U.S. Naval Gunnery Officer and served under President Nixon as Special Assistant to the President and as White House Staff Secretary.

Mr. Huntsman authored a book on corporate ethics entitled, Winners Never Cheat: Everyday Values We Learned as Children (But May Have Forgotten). A second edition, titled Winners Never Cheat: Even in Difficult Times, made the Wall Street Journal's best-sellers list. In 2014, Mr. Huntsman published his inspirational autobiography, Barefoot to Billionaire: Reflections on a Life’s Work and a Promise to Cure Cancer.

He is widely recognized as one of America’s foremost concerned citizens and philanthropists. His lifetime humanitarian giving, including contributions to the homeless, the ill and the underprivileged, exceeds $1.5 billion and has assisted thousands, both domestically and internationally. In 2001, Mr. Huntsman was presented with Ernst & Young’s Entrepreneur of the Year Award. In 2003, he received the Humanitarian of the Year Award from CNN’s Larry King. His collective gifts to colleges and universities alone exceed $300 million. The Chronicle of Philanthropy placed Mr. Huntsman in the second place position on their 2007 list of largest donors. (Dec 2007)

Mr. Huntsman has been awarded thirteen honorary doctorate degrees at various universities. In 2004 he received the Othmer Gold Medal, awarded by the Chemical Heritage Foundation in recognition of contributions in research, innovation, legislation or philanthropy. In 2008, the American Cancer Society presented to Mr. Huntsman its Medal of Honor for Cancer Philanthropy. In 2013 he received the Leadership Award for Lifetime Achievement from the Chemical Marketing and Economics (CM&E) group. And in 2015, he received the Bower Award from the Franklin Institute.

Mr. Huntsman and his wife, Karen, founded the Huntsman Cancer Institute in 1995 to accelerate the work of curing cancer through human genetics. The Institute is now one of America's major cancer research centers dedicated to finding a cure for cancer, as well as a state-of-the-art clinic and treatment center for cancer patients.