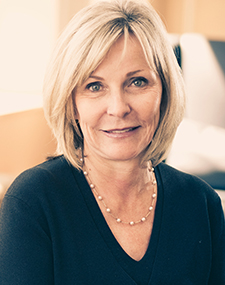 Lynnette Hansen was in third grade when a teacher got her excited about teaching. As she set her sights on becoming a teacher, she excelled academically. She graduated from Sky View High School in 1969 with a 3.9 GPA and was voted the "Most Outstanding Senior."

After working for Thorne & Wilson Investment Securities and working as a teaching assistant at Utah State University, she got a job in the San Diego Community College District. Eventually, she was teaching various business courses at Mesa College in San Diego.

After serving as the financial manager of a material supply business and working for seven years in marketing real estate in San Diego, Ms. Hansen moved back to Utah to work with her father in 1990. She was preparing to take over as chief financial officer when her father sold his firm, Thorne & Wilson Investment Securities, to A.G. Edwards. She worked for A.G. Edwards as an investment broker for five years.

Ms. Hansen said she feels investing in students is an effective way to help people in need because a higher education "teaches them to fish," allowing them to be self-sufficient leaders who can contribute to the community.

In 2007, Utah State University honored her with the prestigious Distinguished Alumnus Award, recognizing vocational success and contributions to the community.