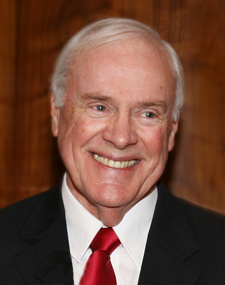 Van F. Dunn, Jr., graduated from Utah State University in 1955 with more than just a bachelor's degree in business administration. He was the epitome of an active collegian. He served as a student body officer and was active in his fraternity, Pi Kappa Alpha. He was also a member of Alpha Sigma Nu and Blue Key. He also held the title of "Most Preferred Man." Following college, Van spent four years in the U.S. Air Force serving as an officer in charge of all Army and Air Force retail operations in Utah. He was honorably discharged in August 1959 as a captain.

Immediately following his discharge from the Air Force, he was hired as the senior procurement officer at Thiokol Chemical Corporation in Brigham City where he was in charge of buying all construction and engineering materials for the company. In 1962, Mr. Dunn became part owner of Coleman Contractors, responsible for all finances, procurement and contract administration. Two years later, he became a securities broker for Merrill Lynch and Company. He spent six months in New York City undergoing training and then traveled back and forth for several years after that. Mr. Dunn took advantage of his time in New York where he worked on his postgraduate degree at New York University while undergoing training for Merrill Lynch.

After ten years spent mostly in Salt Lake City working as an account executive and money manager with Merrill Lynch, Mr. Dunn accepted a position as vice president and syndicate manager with Kidder Peabody and Company where his responsibilities included opening the Salt Lake office. In March 1985, he moved to General Electric Financial Services as senior vice president. He spent the next ten years in this position except for a three–year sabbatical from July 1991 to July 1994 to serve as the president of the England London South Mission, in London, England, for The Church of Jesus Christ of Latter-day Saints.

Mr. Dunn's official retirement took place in January of 1996, but he hasn’t retired in the least. He currently serves as a partner in a steel fabrication business in Las Vegas, Nevada, as well as being involved in land development in Alpine, Utah. He continues to offer his expertise to past clients, especially spouses of deceased clients, free of charge.

Mr. Dunn has played an active part in his community throughout his career including serving as a member of the Amicus Club, the Deseret Foundation, which is a development arm of LDS Hospital and raises funds for medical research. He has been the recipient of many top salesmen, distinguished service, and account executive of the year awards.

Mr. Dunn married his college sweetheart, Janis Bergeson, in 1956. They have 4 children and 16 grandchildren. They reside in Salt Lake City but dream of moving back to beautiful Cache Valley sometime in the future.
Mr. Dunn has fond memories of his time at Utah State University and specifically acknowledges his appreciation for the faculty, especially Professor V.D. Gardener who taught him to "work hard and do well" and Professor Norm Cannon in accounting who taught him the aspects of business that helped him be successful in his career.