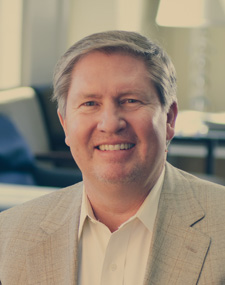 After earning a bachelor's in accounting at Utah State in 1982, Mr. Clark began his career at KPMG in Seattle where he worked in their audit and small business advisory practice. He later served for several years as the vice president of finance for the Cascade Funds and Rainier Partners as well as the CFO of the Genesee Funds.

Mr. Clark and his wife, Bonnie, have five children. The Clark family enjoys many diverse interests. He likes to unwind on his Harley as well as riding horses, skiing, boating, and family activities. Mrs. Clark and the girls are all beauty pageant winners. His sons share in his vintage car enthusiasm, and his eldest son is currently attending Utah State University.

Mr. Clark is also active in community service as a board member of the Weber Foundation where he chairs its Business Development Committee. He is also the chairman of the Utah Junior Miss Board of Directors and a board member of Habitat for Humanity in Ogden, Utah. Mr. and Mrs. Clark fund a Jon M. Huntsman School of Business scholarship.